skip to main | skip to sidebar

From I Heart Chaos:
"In 1946, surrealist Salvador Dali formed an unlikely friendship with Walt Disney and they spent a short time collaborating on a short film called "Destino". Unfortunately, only 18 seconds of Destino were ever shot, but in 1999, Roy Disney reconstructed the entire short using computer rendering and hand-drawn imagery based on the original sketches and storyboards.
The piece was supposed to have been part of Fantasia 2000, but didn't make the cut and hasn't ever seen release anywhere else. So far, the Disney lawyers haven't come after this YouTube video, so cross your fingers that it still works when you click on the play button. And if you want to know where the original footage, is, look for the two weird turtle monsters at around 5:22." 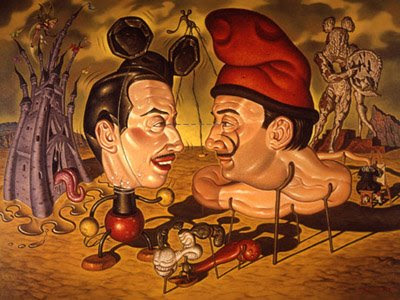 "Five O'Clock Shadows in Dali-Disney Land" by Todd Schorr
Posted by Kirsten Anderson at 8:54 AM